Soliss is member of the Cop Killers and is a slime based cyborg.

Soliss was born outside of NLACakaNM in the mean streets of Dusk Metro, a city far that lies far outside the reach of slime and Kingpins. This city was ran by Corporations, looking to take young thugs like Soliss and turn them into soldiers. Soliss turned out to be quite the stealth operative, they were a skilled Netrunner, espionage agent, and assassin. They were put to good use, but as the years passed Soliss had doubts about their role for the company. The work kept them fed and off the streets. Though living in the shadows, was lonely, and the toll of their worked weighed heavy on their mind.

They eventually got news of NLACakaNM through supply routes, large imports of Pizza, Tacos, and Chicken to the grand canyon are bound to start rumors. Supposed Fame, Wealth, and a clean slate was too much to pass up for Soliss. They ended up stowing away on one of N10s delivery trucks all the way to Arizona, but deep in the outskirts an accident occurred. It left them changed, their flesh and blood melting away in place of purple goo. Some of their cybernetics somehow remained functional and there remained some semblance of sentience in the now monstrous form Soliss has found themselves in. They start scavenging finding more material to build and gain form with while making their way to the Slime City. Now having a low functioning CPU instead of a brain they struggled retaining anything from their previous experiences. Contacts, Training, Memories... all wiped.

Soliss is a shapeshifter and will regularly swap between appearances. They also rely on their cybernetics to keep their form, so malfunction or modification can result in extreme appearance changes. Thought the following stays constant: Their right hand is cybernetic and transforms into various weapons, their left hand is a tentacle or pseudo-pod. They wear a VR headset with blue neon lights. They have curl of hair sticking out the top of their head. From about midway on the shin downward they are all cybernetic.

Soliss can be dressed in nearly anything sleek and stylish though they usually are seen sporting a indigo dress, white knee high socks, and black heels. 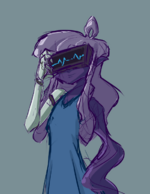 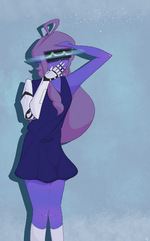 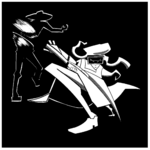 Retrieved from "https://rfck.miraheze.org/w/index.php?title=Soliss&oldid=7988"
Categories:
Cookies help us deliver our services. By using our services, you agree to our use of cookies.